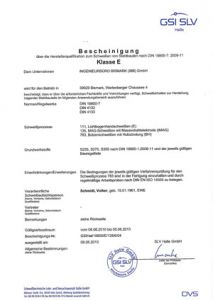 We were able to successfully defend the manufacturer’s qualification certificate for welding of class E steel constructions according to DIN 18800-7:2008-11 for the following welding processes:

The introduction of the ‘new’ German currency on July 1st 1990 laid the foundation for the development of new business relationships. This company was one of the first newly founded corporations within the boundaries of the former district of Magdeburg and hence received the register number 4.

Ibb initially started to work in the small idyllic village of ‘Poritz’ – part of the municipality of Bismark. Just one year after founding the company, in the summer of 1991, ibb had grown so much that the premises in ‘Poritz’ became too small. The company prepared a move to Bismark and bought a property of 3000 m2 along ‘Wartenberger Chaussee’ and built a factory hall of 15m x 30m. And so, this positive development continued.

The opening of the new office building was celebrated in the summer of 1992. Furthermore there were substantial investments for equipment.

Today ibb is a very modern, efficient and high-performance steel construction company. We dispose of 6000 m2 of production space, which is equipped with the latest processing technology. The number of employees has risen from 2 in 1990 to 55 employees in 2010. Currently there are 5 metalworkers in training with the company in order to be able to provide qualified staff.

A particular core element of the company is the manufacturing of steelwork construction of our own designs. Our range of products is very divers. We construct everything, from small products, such as stairs, stages and platforms to the assembly of turnkey production halls, car dealerships or complete production facilities.

We would like thank our many customers for their loyal and close cooperation over many years and we hope to continue the positive development of ibb.

On December 12th 2009 the Vds completed the re-certification audit of our QM system according to DIN EN ISO 9001-2008 successfully.

As a result ibb is able to provide also in 2010 verifiable high quality products in design and manufacturing. 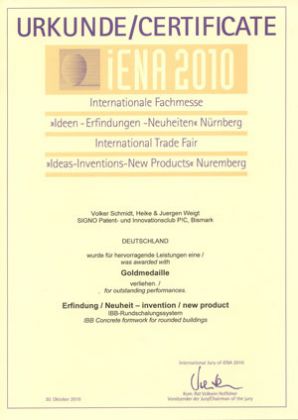 Just like every year, the International Exhibition of Ideas, Inventions and New Products (iENA) was the center for all enthusiast with respect to inventions from 27th to  31st of October 2010. Exhibitors from 37 different countries presented more than 700 inventions and innovations in Nürnberg.

The system of arched sectional forming units for reinforced concrete silos, engineered, created and manufactured by ibb, received a gold medal at this exhibition due to its proven exceptional suitability and efficiency for the construction of numerous biogas plants in the province of Lower Saxony.

This system of arched sectional forming units was exhibited at the SIGNO joint stand. (SIGNO is a project funded and supported by the Federal Ministry of economics for inventors and entrepreneurs.)